Brendan O’Hara MP: “The time has come to ‘rock the boat’ 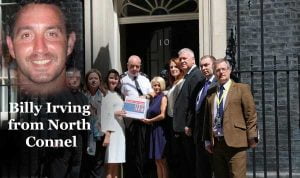 To mark their 1000 th day in captivity, Argyll & Bute MP Brendan O’Hara joined with family members and supporters of the Chennai 6 to deliver a 370,000 signature petition to Downing Street demanding ‘urgent and immediate’ action from David Cameron to secure the release of the six British seaman imprisoned in India, including his own constituent Billy Irving from North Connel.

In January, Billy along with five other UK nationals, all UK military veterans were sentenced to 5 years in an Indian prison for “border and weapons violations” when their anti-piracy vessel the MV Seaman Guard Ohio was seized after it took shelter in Indian waters during a fierce storm in 2013. All of the men have consistently protested their innocence and have presented documentary evidence supporting this. 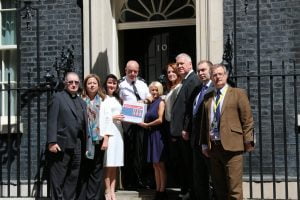 Speaking outside Number 10 alongside his parliamentary colleague Kirsten Oswald MP (East Renfrewshire) and Yvonne McHugh, Billy’s fiancé, Brendan said “Billy has been the victim of a travesty of justice. He and his shipmates were going about their business of protecting shipping, legally and peacefully. That they now
face 5 years in jail for a crime that didn’t happen is absolutely unbelievable and our government must make their case an urgent priority”
Addressing Yvonne and the families, Brendan also said; “What you have done to keep these men at the forefront of people’s minds has been remarkable. You have petitioned, you have lobbied, you have
demonstrated. No one could have better advocates for their cause than you.”
Examining the role of politicians, Brendan continued “I know there is widespread cross-party support in parliament for these men; I recently helped set-up the All Party Parliamentary Group on the Chennai 6 and I will continue to do what I can as an individual MP. But there only so much we can do, particularly as the advice we received from the Foreign and Commonwealth Office was always “not to rock the boat”, as diplomatic channels were the best way to proceed. I’m afraid the time has come to “rock the boat” and we
parliamentarians must now put pressure the UK government to use whatever influence it has with the Indian authorities to see that these men receive justice.”
Brendan concluded: “This is a time of great uncertainty and flux in UK politics, so we must ensure the plight of these men is not forgotten and their case remains a key priority. I continue my pledge to do everything I can to keep the pressure on and ensure the UK government is taking ‘real’ steps to secure their release.”