Local MP Brendan O’Hara will this week travel to the United Nation Headquarters in New York as the guest of a young Yazidi woman, Nadia Murad, to witness her appointment as the Goodwill Ambassador to the United Nations Office on Drugs and Crime (UNODC). 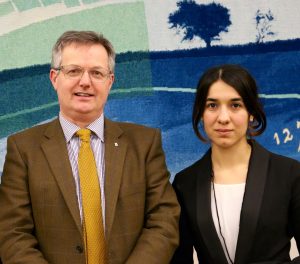 Mr O’Hara involvement in Nadia’s story first began in February last year when a constituent contacted him to ask he would be willing to meet Nadia in Westminster to hear about her horrific ordeal at the hands of Daesh in Iraq. Without hesitation Mr O’Hara said yes and a few weeks later Nadia was speaking to a packed committee room of MPs and Peers about her experience. The 23 year old woman, described how Daesh attacked her village in northern Iraq in 2014, shooting young boys and men in cold blood. She was amongst hundreds of women traded as sex slaves by Daesh fighters and describes how she was repeatedly raped and beaten for 3 months before she managed to escape to Germany.
Since then Nadia has been a relentless advocate for Yazidi victims and has met with heads of State and global leaders to raise the plight of the Yazidi people in Iraq still enslaved by the evil regime.
Mr O’Hara’s reaction to the invite said
“I feel very honoured and humbled to be invited to Nadia’s appointment ceremony as Goodwill ambassador to the UN. When I first met Nadia, I was struck by her amazing strength and determination to make sure her story was heard by the outside world. Her story is a harrowing one and she is without doubt one of the bravest people I have ever met. We owe it to her to listen to her story and not turn away. It is a story the world has to hear.”
The ceremony, to be held on the Thursday 15th September, at the UN Headquarters in New York will also feature speeches from Ban Ki-moon, Secretary General of the United Nations and Amal Clooney, International Human Rights Barrister and Attorney for Nadia.
Nadia continues her fight for advocacy initiatives and raising awareness around the plight of millions of victims of human trafficking, especially refugees, women and girls.
_____________________________________________

The invite is from The United Nations Office of Drugs and Crime (UNODC), in partnerships with the Permanent Mission of the United States to the UN to the Appointment Ceremony of Ms Nadia Murad Basee Taha as the UNODC Goodwill Ambassador for the Dignity of Survivors of Human Trafficking on the International Day of Peace, Friday 15th September at the Trusteeship Council Chamber, United Nations Headquarters, New York, United States.
Ms Murad, a 23 year old Yazidi woman and Nobel Prize nominee who survived trafficking at the hands of Daesh, briefed the UN Security Council in the first ever session of human trafficking which was held during the presidency of the United States in December 2015.
She was recently named on Time Magazine’s list of “100 Most Influential People of 2016.
Image attached: Yes (Brendan with Ms Nadia Murad when they met in Westminster earlier this year.