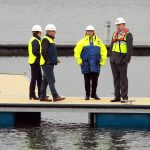 Following his re-election to Westminster, Brendan O’Hara MP wasted no time in getting back on board with various initiatives to promote Argyll and Bute as an amazing place to live, work and do business in.  Having committed prior to the General Election to the economic regeneration of Argyll and Bute, Brendan O’Hara is standing by pre-election initiatives which had to be postponed due to the snap election.

Prior to the election and in his speech following the Count at Kilmory in the morning of June 9th, Brendan reaffirmed the commitment to work with all stakeholders in the promotion of Argyll and Bute.  One such initiative was to engage with Argyll and Bute Council to understand better the immense work underway in the Economic Development Team, with Council Official Fergus Murray at the helm. 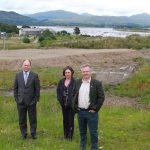 Brendan and Fergus met in Oban to tour the various redevelopment projects underway in and around Oban and Connel, including the new transit berthing facility, proposed housing redevelopment and the prominent and recent aquaculture investments in the Argyll coastline.

“I was delighted to see the work already well underway to reinvigorate Oban and the surrounding area.  The future for what is after all a University Town is inspirational.

Argyll and Bute is probably one of the best placed constituencies to take advantage of the boom in marine tourism, our coastline exceeding that of the whole of France.  It stands to reason that our economy should take advantage of all that our marine environment has to offer.

Not only do we have an exceptionally scenic coastline and townships but also our access to an immense natural resource that our surrounding waters can offer.  The developments in and around Oban is nothing short of inspiring.

I do feel that Argyll and Bute is on the cusp of becoming a beacon for both marine and maritime industries, whilst retaining our age-old heritage assets.  What’s not to like?

Working in tandem with other agencies such as Highland and Island Enterprise, the future and potential for the second biggest constituency in the UK is immense.

Oban has a distinct buzz about it, things are happening and I’m really excited for the town.  Of course, there are many challenges – but if we all get behind the potential of the town and have a realistic conversation about what the challenges are and how to address them, everyone stands to benefit.

It’s worth adding the economic regeneration team are keen to engage with all stakeholders and I would strongly urge all stakeholders to take up this offer to discuss the opportunities in and around Oban and Connell.”