Financial Fraud Action UK  indicate that there were over 1.8 million incidents of financial fraud last year, impacting people across the country including right here in Argyll and Bute.  The Take Five week brings together banks and building societies, local law enforcement, the government and MPs, as well as public and third sector organisations to give advice to the public. 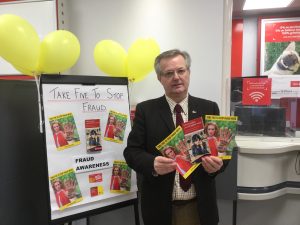 Following the visit, Mr O’Hara said of the campaign,

“Criminals are now very sophisticated, so it is more important than ever that people are aware of the advice from Take Five on how to protect themselves from becoming a victim.  Fraudsters will do all they can to appear like the real deal, so always be on your guard for any calls, texts or emails out the blue asking for your details.  During the Take Five week we want to get the message across that is vital to stop and think before you give away any information.”

More advice can be found by visiting www.takefive-stopfraud.org.uk