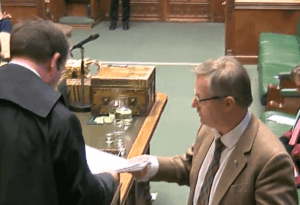 The fight to save the Campbeltown branch of RBS from closure moved on to the floor of the House of Commons this week when local MP Brendan O’Hara presented a petition to parliament. (Thursday 22 March).


The petition which was launched by Mr O’Hara back in December last year, as soon as RBS announced their closure list, has gathered the signatures of several hundred local people. 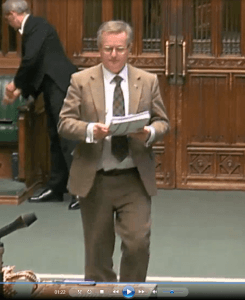 “As I promised to do, I presented a petition on behalf of the people of Campbeltown and the Kintyre peninsula. Ten years ago the people of this community along with other UK taxpayers bailed out RBS to the tune of £50 billon and now without any consultation, they have decided that the Campbeltown branch will close. This petition is yet another clear message to RBS that this decision is vehemently opposed by the community. Thank you to everyone who took the time to sign the petition and they can be assured that I will continue to work with the community to make case for this bank to remain open for business. We are not giving up.”

A link to Mr O’Hara presenting the petition can be found at https://bit.ly/2pzwgNd

‘Declares that proposed closure of the Campbeltown branch of the publicly-owned Royal Bank of Scotland will have a detrimental effect on local and surrounding communities and the local economy.

The petitioners therefore request that the House of Commons urges Her Majesty’s Treasury, the Department for Business, Energy and Industrial Strategy and the Royal Bank of Scotland to take in account the concerns of petitioners and take whatever steps they can to halt the planned closure of this branch.