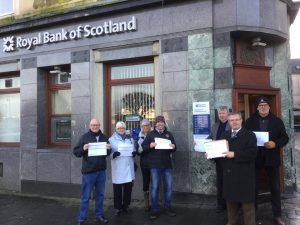 The SNP has said that the Royal Bank of Scotland have ‘failed to answer’ many questions as three senior executives, including Chief Executive, Ross McEwan appeared before the Scottish Affairs Committee at Westminster this morning.

With countless customers and businesses being hit by branch closure plans, SNP members of the Scottish Affairs Committee have said it is ‘disappointing’ that RBS have failed to listen to the anger and frustration voiced by so many.

“Once again, RBS have showed the contempt in which we customers are held. They have failed to listen to the anger and frustration that so many customers, businesses and communities have voiced about these cuts.”

“Over Christmas and New Year I collected literally thousands of signatories on petitions for each of the three proposed closures in Argyll and Bute; neither RBS nor the UK Government seem to take these concerns seriously.”

“These closure plans – which still mean the loss of dozens of branches across Scotland – will leave many communities without physical banking services, hitting rural areas who greatly depend on them.”

“Quite simply, RBS are failing to consider their social responsibilities to rural and urban communities and to the long-lasting damage these closures will cause across Scotland.”

“That is why the SNP will try to save these banks and it is time that other parties joined us in that campaign, to put pressure on the UK Government to work in Scotland’s interest, to force this public company to respect the communities that are in danger of being abandoned.”

In December, the majority taxpayer-owned Royal Bank of Scotland announced the decision to close 62 of its branches in Scotland, including those in Campbeltown, Rothesay and Inveraray. With pressure from the SNP, local communities and businesses, RBS conceded to a temporary reprieve to 10 of these branches until the end of 2018 for review.