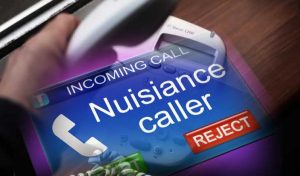 Bosses of firms which bombard people with nuisance calls could now be fined up to £500,000 under government proposals to make them personally liable. At the moment, only the companies themselves are liable for fines of up to £500,000 if they break the law.

Patricia Gibson SNP MP led on this cause at Westminster, and introduced her Bill on nuisance calls in 2016  – the UK Government agreed then to fully adopt the recommendations proposed and legislate to make directors personally responsible for their company’s actions, should it be involved in making nuisance calls.

‘I have regular bouts of constituents contact me about nuisance calls and often the remedy was difficult to impose.

Nuisance calls can be the bane of people’s lives so I am relieved that the full provisions of Patricia Gibson’s Nuisance Calls Bill are to be implemented by the UK Government – even if it has been a very long time coming.

This will mean that bosses of nuisance call operations could be fined up to £500,000.

‘’Scores of constituents have contacted me in the past three years, explaining how nuisance calls are making their lives a misery and seeking action to prevent them. These communications can be particularly disturbing for the most vulnerable people in our communities.

“For far too long, fines or sanctions have been easily avoided by companies dissolving and resurfacing using a new moniker. The UK government agreed that company directors would be held to account and could face personal fines of up to £500,000, should it be proven that their company acted unlawfully.

“Today – finally the UK government have lived up to their commitment to adopt the recommendations proposed in the SNP Bill – including legislating to make company directors personally responsible – and that will hopefully end the scourge of these calls for many of us.’’