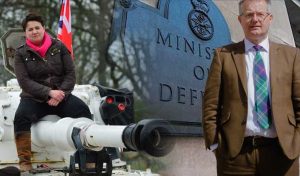 The Tories’ hypocrisy on MoD wages has been exposed – after it was revealed that around 220 staff in Scotland don’t receive the Real Living Wage, just days after the Tories topped up the pay of some of the best paid MoD staff.

An MoD Freedom of Information response revealed that 220 staff in Scotland earn below the Real Living Wage of £8.75 an hour – yet they are not in line to receive any pay boost from their employers. The Tories’ policy is set to cost around £4 million – yet boosting the wages of those receiving less than the real living wage would cost, at most, under £400,000.

The SNP has accused the Tories of “utter hypocrisy” and “double standards”.

“This smacks of utter hypocrisy from the Tories, after their comments of recent days regarding pay for forces personnel.

“If they are so concerned with equality – why aren’t they ensuring that all MoD staff are paid the living wage?

“Boosting the incomes of the lowest paid MoD staff could cost the Tories less than a tenth of what they are spending to top up higher incomes – yet once again, for people on lower incomes they are not prepared to lift a finger.

“The Tories’ double standards know no bounds – it’s one rule for the elite and another for the rest.”