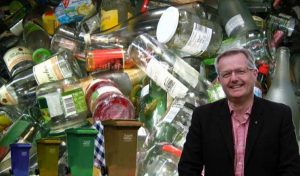 Last year saw another increase in the percentage of household waste that was recycled in Argyll and Bute.

Statistics released by the Scottish Environment Protection Agency (SEPA) show that recycling rates in Argyll and Bute increased from 33.9% in 2016 to 38.7% in 2017, although landfill waste continued to exceed recycled waste.

“It is great to learn that Argyll and Bute is making progress with recycling, however, there is still work to be done in our communities to ensure that our recycled waste exceeds waste sent to landfill.”

“We all have a stake in protecting and preserving our planet and all too often, we can see the blight of plastic bottles and containers all around us.”
“Scotland are leading from the front as we have set some ambitious and challenging targets for recycling, above and beyond the standard EU target.”

“During recycling week, I would urge everyone in the community to continue to be mindful about recycling as we work to end the throwaway culture.”

The amount of household waste sent to landfill was also down by 24,848 tonnes.