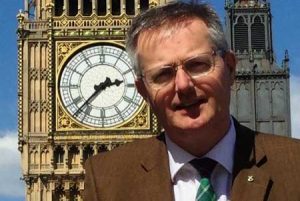 In a heated exchange with the Prime Minister, MP Brendan O’Hara accused Theresa May of deliberately putting his Argyll & Bute constituency at a “competitive disadvantage”, when compared to their near neighbour in Northern Ireland.

The row blew up in the House of Commons following the Prime Minister’s long-awaited statement on the Brexit Withdrawal Agreement, when Mr. O’Hara claimed that the “special deal” proposed for Northern Ireland would cost jobs, hit businesses, deter investment and could, ultimately lower living standards in his “already economically fragile” constituency.

“The Prime Minister struggled to answer my question as to how this deal is good for my already economically fragile constituency. Our neighbours in Northern Ireland, who will stay in an advantageous position with in a customs union, will be in a very strong position to attract jobs and investment at the expense of Scotland, particularly us here in Argyll and Bute just across the water. We have ended up with the worst of all possible outcomes with England and Wales voting to leave and leaving, Northern Ireland voting to remain and retaining a foothold into the EU and Scotland who voted to remain being completely dragged out against its will.”

He went on to say,

“No one should fall for this false choice being desperately spun by this isolated Tory Prime Minister, that seeks to force us to choose between a “bad deal” or a “no deal” at all. With the Tories stuck in a civil war, the SNP will be working constructively with cross party MPs to bring about an outcome that minimises the damage to Scotland.”