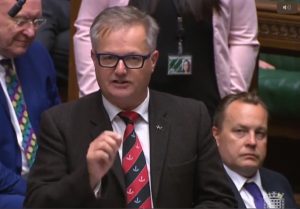 “Suspension of parliament outrageous and undemocratic”: 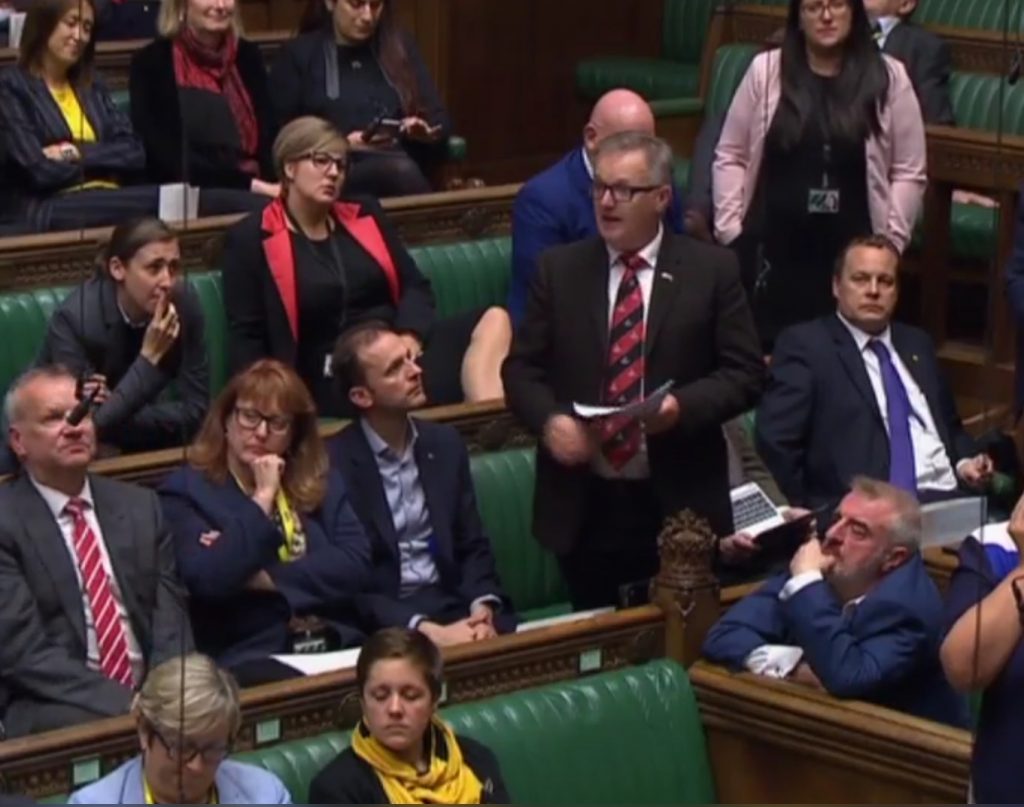 In the wee, small hours of Tuesday morning, in one of the very last contributions before the House of Commons was suspended for five weeks, Argyll & Bute MP Brendan O’Hara used the parliamentary mechanism of a Point of Order to unreservedly condemn the UK government’s decision to suspend parliament, describing the move as both “outrageous and profoundly undemocratic”.

Citing what the former Work and Pension Secretary, Amber Rudd said when she quit the Tories at the weekend, Mr. O’Hara accused Boris Johnson and his government of having little or no interest in negotiating a deal with the European Union and said that they seemed “hell-bent on pursuing a catastrophic policy of a No-Deal Brexit”

Seeking the advice of the outgoing Commons Speaker John Bercow, the Argyll & Bute MP asked how he might register his “anger and deep frustration” at being forced out of parliament, just seven weeks before the UK is due to leave the European Union adding that, “the very least the people of Argyll & Bute should expect is that their elected Member of Parliament be able to represent them, here in this Chamber at such a critical time”.

For the last couple of weeks my office has been inundated with constituents getting in touch to express concern over delays to the re-opening of driving test centres with many being told to take a test hundreds of miles away.
Almost a fortnight ago, I raised this with the UK Department for Transport which has responsibility for DVSA and I hope this has helped get their plans for Argyll and Bute into gear.
I am still, however, concerned that there has been no mention of the centres in Lochgilphead and Campbeltown re-opening and if other centres will open for extended hours to cope with the backlog, and have written again to the UK Transport minister to ask for further clarity.
Whether we like it or otherwise, the reality is cars are very often a necessity in this large rural constituency, they are essential for those travelling to work, college, for shopping and, in some remote areas, even taking children to school, and we must see all test centres re-open as soon as possible. ... See MoreSee Less

Learners driven up the wall by testing queue | The Oban Times

Snarl-up in driving tests as local learners expected to sit in Inverness, Glasgow, Dunbarton and Greenock.
View on Facebook
·Share

Scottish Tory MPs have further enabled the UK government's plans to dismantle devolution after they backed proposals to allow the UK government to override decisions of the Scottish Parliament – despite an overwhelming majority of Scottish MPs voting against it.

A vote on Clause 46 of the Internal Market Bill last night - which the SNP has warned will allow the UK government to bypass Scotland’s Parliament and allow Westminster to take control of devolved spending in key areas such as education, infrastructure, economic development and sport - passed by 340 votes in favour to 51 against.

Scottish Tory MPs rejected opposition amendments to exempt Scotland from provisions that infringe on the devolution settlement - despite Douglas Ross’ pledge to stand up for Scotland and to stand up to the UK government.

"With the support of Scottish Tory MPs, the UK government has moved closer to its aim of dismantling devolution, stripping spending powers away from the Scottish Parliament, and centralising powers in Westminster.

“The SNP has repeatedly warned against the power grab bill which would ride roughshod over devolution and allow UK government ministers to take control of key devolved areas such as education, infrastructure, economic development, culture and sport.

"The Tories want to take control of devolved spending and replace the priorities of the democratically elected Scottish Parliament with their own. The Tories are attempting to orchestrate the biggest power grab in the history of devolution.

"Despite an overwhelming majority of Scottish MPs voting against the move, once again the Scottish Tory MPs obeyed their Westminster bosses, rejected amendments to exempt Scotland, and sold out Scotland's interests.

“From running the line to running out of excuses – it’s obvious that rather than standing up to his Westminster bosses, Douglas Ross is proving to be nothing more than Boris Johnson’s man in Scotland.

"It's clear beyond any doubt that the only way to protect the Scottish Parliament's powers is through independence." ... See MoreSee Less

Extending the furlough scheme by eight months could save 61,000 jobs in Scotland, according to new research.
A Scottish Government report estimates that the direct cost of extending the furlough scheme in Scotland to June is around £850 million – and wider economic benefits, such as increasing GDP, mean that it could pay for itself.
It comes as the Business Impact of COVID-19 Statistics, also published today, found that of all Scottish firms surveyed, over two thirds were still furloughing their workforce to some extent. The new data also estimated 15% of the workforce were still on furlough.
Economy Secretary Fiona Hyslop said:
“The UK Government must think again about withdrawing blanket support and they must urgently implement some form of extension which would continue to provide help for the sectors that have been most heavily affected.
“Extending the Job Retention Scheme for eight months would save 61,000 jobs in Scotland and help secure a stronger economic recovery from coronavirus (COVID-19). Unlike the Scottish Government, the UK Government has the borrowing powers necessary to fund the extension of the Job Retention Scheme and they must act now to protect jobs and livelihoods.
“New furlough statistics for Scotland published today show wide variation between different sectors of the economy. Even though in some sectors a significant number of people have gone back to work, the outlook is much bleaker in other sectors. In accommodation and food services an estimated 34.4% of staff were still on furlough, and this rises to 57.5% of staff in the arts, entertainment and recreation sector.
“Of course, the furlough scheme cannot continue indefinitely, but an extension would help keep people in jobs while sectors of the economy currently unable to fully open recover and will lead to sustained economic benefits at a relatively small cost.” ... See MoreSee Less

It's really worrying to hear that scammers are trying to trick constituents into paying for COVID-19 contact tracing by claiming to be part of NHS Test and Protect, and subsequently asking for bank details.
COVID-19 tests are free and Test and Protect will never ask for bank details or try to sell anything.
Anyone with concerns is asked to report them to the Consumer Advice team operated by the charity Advice Direct Scotland, freephone 0808 164 6000 or visit www.consumeradvice.scot
Please share this information to raise awareness of these scams. ... See MoreSee Less

Both the Scottish and UK governments have been advising against all but essential travel since March. However, this advice has been lifted for certain destinations that ''no longer pose an unacceptabl...
View on Facebook
·Share

Tonight in the House of Commons I spoke about how the UK Government intends to move the goalposts on leaving the EU by ripping up the Withdrawal Agreement and threatening the Northern Ireland Protocol with its Internal Markets Bill.
It is no longer a case, as they have always liked to think, of Britannia ruling the waves, but of Britannia waiving the rules.
Fortunately, Scotland has a way out of this mess. That way is Independence and that is getting closer. ... See MoreSee Less

The UK government must do more to support struggling families, including through extending the furlough scheme, after a damning new report forecast a "61% increase in food parcels” in the coming months – equating to “six parcels given out every minute.”

- In April, there was an 89% increase in the number of emergency food parcels given out compared with the same month in 2019. This included a 107% increase in the number of parcels given to children, compared to the same period last year.
- There is likely to be at least an extra 300,000 emergency food parcels distributed by food banks in the Trussell Trust network in the last quarter of this year – an increase of 61% compared to the previous year.
- In the second quarter of this year, the need for food parcels remained “much higher than normal, at 81% above last year’s levels.”
- And, that “removing the current temporary increase in the Universal Credit standard allowance rate could increase use of food banks in the Trussell Trust network by almost 10%.”

In its conclusions, the network backed calls made by the SNP on the UK government to protect people’s incomes by making permanent the £20 uplift to Universal Credit and to “rethink the impending cliff edge of the Job Retention Scheme coming to an end.” ... See MoreSee Less

If this is true and Jackie Baillie joined forces with the ermine-clad Baron Foulkes of Cumnock to lobby BBC Scotland to remove the Scottish Government’s daily pandemic update, then she should hang her head in shame. The disgraceful prioritising of narrow party politics above public health is breathtaking.
To see the MSP for Dumbarton, where Covid cases are among the highest in Scotland and which includes Helensburgh & Lomond, with a large, rural, elderly population, campaign to remove live TV public information updates, particularly as winter nears and as cases are on rise again, simply beggars belief.
How can you be the person responsible for stopping public health information during a global pandemic? ... See MoreSee Less

Great to see over 250,000 + people across Scotland have already downloaded the Test and Protect app since its launch earlier today.
This is for residents in or visiting Scotland. It's confidential, doesn’t track your location and will not share your identity or location with others. BUT it will help keep us all safer.
Please sign up and keep spreading the word - the more who sign up, the more effective it will be in helping us beat COVID. Download at protect.scot ... See MoreSee Less

I am #NoToYes ! What a bad mistake I made , eternally ashamed but the joy of being part of the independence now is indescribable . I yearn for the day when both my native and adopted lands of Wales and Scotland are both free . It’s coming . 🏴󠁧󠁢󠁳󠁣󠁴󠁿🏴󠁧󠁢󠁷󠁬󠁳󠁿

As the only Scottish #distillery to complete 100% of the production process on site, with human involvement at each and every stage, our distillery is busy and bustling.

While the debate rumbles on about the future of Argyll's road connectivity, these guys are getting on with repairing what we've got. Great work. https://twitter.com/NWTrunkRoads/status/1306907074375430144

#A83 #RestAndBeThankful: Repairs are ongoing to stabilise a short section of embankment supporting the road which was eroded due to large volumes of water & debris washing over the edge of the road. The OMR local diversion route remains in use. More here: https://buff.ly/2RosCUH

Six years ago today only two of our family could vote for independence. Today, there would be a 100% increase in the Yes vote from the O’Hara household. They are the independence generation. “It’s coming yet for a’ that”. #indyref2 #YES

Argyll's primary trunk road must be treated as the emergency it is, says @BrendanOHaraMP.

COVID is accelerating across Europe. ⁦@scotgov⁩ will be considering carefully if further measures are needed to stem the increase. In meantime, please follow all advice on social gatherings & FACTS. And please download http://protect.scot https://www.bbc.co.uk/news/world-europe-54189575