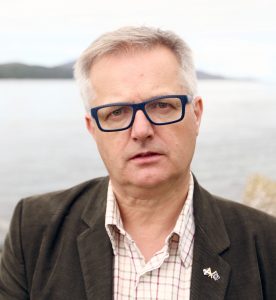 DISASTER AND PROTECT SCOTLAND’S RIGHT TO CHOOSE
The coming election will be “one of the most important in Scotland’s history,” said Brendan O’Hara MP for Argyll & Bute – urging Scots to register to vote now to stop a Tory Brexit disaster and to protect Scotland’s right to choose its own future , MP Brendan O’Hara added that a decade of Tory austerity cuts and the Brexit crisis had shown that “Britain really is broken and unfit for purpose”
‘The UK Parliament had “failed Scotland abysmally” throughout Brexit creating the “worst crisis since the Second World War” – and said “every vote will count” in an election that will be fought on Scotland’s right to choose our own future.’

“The coming election will be one of the most important in Scotland’s history. With so much at stake, it will be a vote for Scotland’s future.

“It is vital that Scotland sends a strong message, loud and clear, that we reject Boris Johnson’s extreme Brexit, which could cause a deep recession, destroy jobs in Argyll & Bute, and inflict lasting harm on living standards, public services, and the economy.

“The SNP will be putting Scotland’s opposition to Brexit and our right to choose our own future with independence at the heart of the contest – and every vote will count. It is vital that people across Scotland register to vote now, so we don’t lose our right to have a say in this crucial election.

“The past decade of deep Tory austerity cuts, Brexit crisis, and Westminster chaos has shown that Britain really is broken – the UK is not fit for purpose. Westminster has failed Scotland abysmally, creating the worst crisis since the Second World War.

“The people of Scotland deserve the choice of a better future than the one being imposed upon us by Westminster. It’s clearer than ever that the only way to properly protect our interests is by becoming an equal and independent European country.”