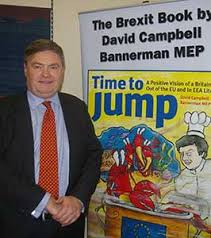 LEAVE MEP THREATENS SCOTLAND WITH BUDGET CUTS
Just days after the UK voted to leave the European Union – against the will of the overwhelming majority of voters in Scotland – Brexit Tories on the right of the party are threatening Scotland’s budget with systematic cuts.
East of England Tory MEP David Bannerman tweeted that a “new Brexit Government should suspend the Barnett formula for Scotland” – raising the spectre of a Boris Johnson-led Tory government at Westminster initiating a systematic and cynical erosion of Scotland’s finances.

These threats follow claims made throughout the campaign, most notably from key Vote Leave spokesperson Lord Owen who claimed that a Brexit would allow the UK government to cut Barnett and start a drive towards greater UK unity.

Commenting, Christina McKelvie MSP, who is speaking in the Scottish Government’s Debate at Holyrood this afternoon on the Implications of the EU Referendum for Scotland, said:

“People across Scotland – in every single part of our country – voted to remain in the EU and we are determined to make sure that clear democratic expression is recognised.

“The First Minister has rightly set out the options for Scotland from here, and her commitment to engage with Europe to ensure that we are now taken out of the EU against our will.

“It’s absolutely outrageous – and clearly undemocratic – for an elected Tory politician to suggest that Nicola Sturgeon has no right to be working in Scotland’s best interests. In fact, she’s the only leader in the UK showing any sort of leadership with both the Tories and Labour in disarray following last Thursday’s vote.

“Talk of using the fallout from the referendum to railroad systematic cuts to Scotland’s budget is the worst sort of political opportunism from some right-wing Tory Brexiters – and is a grim insight into what Scotland can expect if Boris Johnson wins the Tory leadership.

“It’s time for Ruth Davidson to finally stand up for Scotland – and condemn these undemocratic factions within her own party looking for any excuse to cut Scotland’s budget.”