“Loneliness is a public health issue, NHS Highland launch initiative to
raise awareness”
I welcome the NHS campaign to highlight the detrimental impact of loneliness which can affect so many people, young or old. In Argyll and Bute, we have a higher proportion of older people and our remote and rural geography which can make loneliness even more prevalent.
Loneliness can affect our physical health, our mental health, can even increase the risk of Alzheimer’s Disease, a cause I have particular interest in. 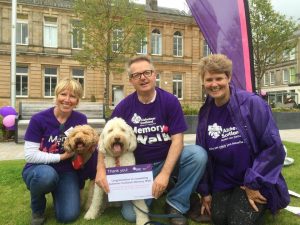 The NHS Highland campaign are looking to raise awareness and encourage the public to pledge to help tackle loneliness. I believe Scottish society has a long tradition of social engagement with our friends and neighbours and we care. Loneliness can be so easily overlooked. This campaign will be running throughout 2016 and 2017. I would urge us all to take a moment and engage with this campaign and if nothing else, be aware that loneliness is a very real problem.

• Campaign materials can be found at https://www.facebook.com/NHSHighlandReachOut/

With just one month to go till the Brexit extension deadline, the SNP has urged the UK government to heed the growing "chorus of calls for a common sense approach" and to extend the transition period without further delay.

As the fourth and final round of talks gets underway this week, the London Mayor added his voice to calls from opposition parties and businesses for an extension to protect the economy and thousands of jobs - urging the Tory government to put "political ideology aside."

After the EU's chief Brexit negotiator wrote to the Westminster leaders of the SNP, Lib Dems, Plaid Cymru, SDLP, Green Party and Alliance Party confirming the bloc remains open to an extension, Michel Barnier issued a stark warning that the “UK has been taking a step back – two steps back, three steps back – from the original commitments,” and risked a No-Deal Brexit.

"With just one month to go till the Brexit extension deadline, it is vital that the UK government heeds the growing chorus of calls for a common sense approach and extends the transition period to protect jobs and the economy.

“The coronavirus pandemic has already put businesses under unprecedented financial pressure and crashing out of the EU at the end of this year – with a bad deal or a catastrophic No-Deal - would deliver a devastating economic body blow from which many firms would struggle to recover.

“Negotiations are reaching deadlock, particularly around the honouring and implementation of the Northern Ireland Protocol, and EU sources suggest the UK appears to be stalling talks in order to crash out with a ‘No-Deal’ Brexit. Businesses, opposition parties and devolved governments are pressing for an extension – it is vital that the UK government doesn’t just let the clock tick down but puts people’s livelihoods ahead of narrow political ideology.” ... See MoreSee Less

Over the last few days I’ve had several constituents contact me with concerns about an increase in motorcyclists in Argyll & Bute, particularly in the Inveraray area.
In ‘normal’ times this would not be unusual and as long as speeding is not taking place, I know many of our local businesses welcome the passing trade these visitors provide.
However, these are not normal times and just because people are staying at home and there are less cars about, this does not mean that bikers can have free rein on our roads.
We have many more people out walking and cycling in their local areas and it is great to see this uptake in exercise being taken in accordance to Scottish Government guidelines.
In response to complaints about the speed and noise being generated by this increase in motorbike activity I contacted the local road policing unit for Argyll & West Dunbartonshire.
Inspector Archie McGuire said he would like to remind motorcyclists and all road users who may be planning to travel to this area to consider their actions and the effect this may have on the community especially during this challenging period.
He said: “Unfortunately, a very small minority of these riders behave in an anti-social and irresponsible manner by driving or riding dangerous or carelessly or with disregard to speed limits, leading to complaints from the public and an increased risk of them being involved in a collision.
“Obviously with the lockdown situation this year, which occurred at the start of the traditional motorcycling season, overall traffic has been low. However, we are now beginning to see an increase in motorcycle activity across the area, especially as the weather improves and this is likely to increase this weekend after the changes to Government guidance.
“With regards to those road users who behave in an anti-social or irresponsible manner by driving or riding dangerous or carelessly or with disregard to speed limits, high profile road policing patrols and road checks are carried out by Roads Policing officers with a view to detecting those who do and deterring others from doing so.
“In addition, unmarked patrols are routinely undertaken with a view to detecting those drivers and riders who pose an extreme risk to road safety.
“In respect of Covid-19 legislation and guidance, if it appears to officers during the course of their patrols that any persons, including motorcyclists or other road users may be in breach of current Scottish Government advice or requirements in respect of this, they will engage with them explaining why this is necessary and encourage them to co-operate. Where appropriate, and as a last resort, officers will enforce the law.”
If you have concerns about speeding motorcyclists or motorists please call 101 to make a report. ... See MoreSee Less

This afternoon the First Minister, Nicola Sturgeon, made it very clear that lockdown restrictions, eased on Friday, can be tightened up again if people do not follow the guidance. At the weekend we saw many people flocking to beauty spots, particularly across Argyll and the Highlands including Loch Lomondside and Glencoe. Traffic on the A82 was three times higher than the previous Saturday. That resulted in widespread concerns being expressed by local communities. This is a virus that while suppressed, is extremely dangerous and cannot be contained. None of us wants a return to full lockdown so please follow the guidance and stay safe. ... See MoreSee Less

This is a really helpful update from the Financial Conduct Authority (FCA) on business interruption insurance and the test court case it is pursuing on the validity of claims.
I have contacted the FCA on behalf of many local businesses affected and I know many constituents have also been in touch with them directly. ... See MoreSee Less

The Financial Conduct Authority (FCA) is today providing an update on progress on its court action on business interruption (BI) insurance policies.
View on Facebook
·Share

A huge well done to all involved in Achievement Bute and those who contribute to the weekly 'Lockdown News' bulletin. This week's show features a really helpful update on lockdown guidance - including a reminder not to flock to our local beauty spots - a piece on Rothesay Golf Club and the great tractor tribute to the NHS and other key workers by Bute Junior Agricultural Club (BJAC) . You can also see Mia's interview with me in the 'The Grilling'. Well done all! ... See MoreSee Less

THE LOCKDOWN NEWS @ 6PM The ABC News Team have been busy collecting all the stories from Lockdown this week! Argyll and Bute MP, Brendan O’Hara, gets grilled...

The SNP's Shadow Chancellor has warned the Tory government against putting jobs and businesses at risk with proposed changes to the furlough scheme - after a quarter of employers said that they will not be able to cover salary contributions for furloughed workers.

Research published by the Institute of Directors yesterday revealed that a quarter of employers using the furlough scheme would be unable to afford to make any contribution at all towards workers' wages as the economic hit of the pandemic is felt.

My Westminster colleague Alison Thewliss MP has called on the Chancellor to step back from plans to lower the UK government's salary contribution from 80 per cent to 60 per cent from August - forcing businesses to cover the significant salary gap – saying that the move could lead to mass redundancies as businesses are pushed to the brink by taking on unmanageable debt or being unable to afford salaries.

The SNP has also renewed calls on the UK government to ensure that the devolved nations continue having full access to the scheme for as long as is required to protect jobs and the economy. ... See MoreSee Less

Great work from the Advertiser in turning this summary on the 'do's and dont's' of Phase One around very quickly following the First Minister's briefing at lunchtime.
Please remember the overall message is still to stay at home where possible, avoid visiting local beauty sports, remain in your primary residence (not a second home) and please do not try to travel on the ferries or to remote communities unless absolutely necessary.
We must continue to follow public health guidance including regular handwashing and social distancing to keep the 'R' number down. This will allow us to continue to move through these phases of easing lockdown as quickly and safely as possible.
More information is also available at www.gov.scot/coronavirus-covid-19/ and on my website brendanoharamp.scot/2020/05/28/phase-1-on-the-routemap-to-easing-lockdown/ ... See MoreSee Less

Scotland's lockdown eased: Six things you can and can't do as 'phase 1' begins

First Minister Nicola Sturgeon will give a press conference at 12.30pm today on the review of the coronavirus lockdown restrictions. All guidance is available at www.gov.scot. You can watch the press conference at twitter.com/scotgov ... See MoreSee Less

Member of Parliament for Argyll & Bute.

Still seeing absolutely no let up in emails calling for PM to sack #DominicCummings being received by @BrendanOHaraMP #ArgyllAndBute This is not going away. #CummingsMustGo

We are delighted to welcome the Gourock-Kilcreggan ferry service into the CalMac family from today. The 13 minute crossing becomes our 29th route and the leasing of the MV Chieftain takes our total fleet complement to 34 vessels ⛴️.

Really enjoyed tonight's virtual quiz with @DUSNA_1. Great to catch up with friends in sunny Dundee! Thanks to @Josh_Harper1999 for inviting me along and to @BrendanOHaraMP for hosting!

Brilliant, passionate piece by ⁦@fidelmacook⁩. My OH agrees with every word of it and he voted NO in 2014. Things are-a-changing.

Argyll and Bute MP, @BrendanOHaraMP, gets grilled with the questions that adults are too scared to ask!🤩

World cup of Uk constituencies@WCofElectorates·
26 May

Vote & Retweet for a Larger Audience

Our wee shop is now on the fabulous @Isle20Shop! https://www.isle20.com/atlantic-islands-centre/ Local crafters, cards, books. All sales go towards keeping our centre afloat!