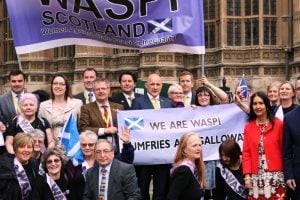 On Wednesday, June 29th, Brendan O’Hara joined women from across the country at a demonstration outside the Palace of Westminster in support of women hit by the acceleration of the equalisation of the State Pension Age, a change which began in 1995 and was compounded in 2011.
Campaigners also met their local MPs inside the Palace in order to secure their support for the campaign. 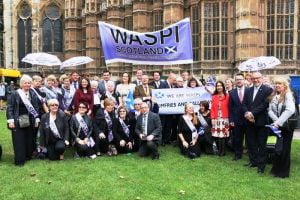 In Argyll and Bute alone, according to the independent House of Commons Library, around 4,590 women are directly affected by the 2011 Pensions Act alone. 421 Argyll and Bute women signed the e-petition calling for transitional arrangements, which received almost 200,000 signatures nationwide.
The Women Against State Pension Inequality (WASPI) campaign works to lobby the Government to introduce transitional arrangements for those women affected, many of whom were not notified about the changes, and took early retirement, leaving them without any income.
Speaking at the protest, Brendan said:
“We want to get the best outcome for these women, many of whom have worked hard for decades without taking a penny out of the system. I am therefore proud to join them at their demonstration in Westminster today.
“These women had been told that they would be entitled to their pension at the age of 60 but instead get hit twice – first when its raised to 65 in line with men and then again when its increased for men and women to the age of 66. Successive governments have failed in their obligation to give ample notice to women affected by this – some have had as little as 2 years and many have received no notice at all – this is unacceptable.”
“I hope we will soon have the equitable outcome that the WASPI women deserve.

As fish, seafood and shellfish producers from across the Scotland and the rest of the UK take their protest to Westminster today, I have made a direct appeal to Boris Johnson to step up and provide a multi-million pound package of compensation as a matter of urgency. I have written to the PM calling on him to take urgent action to protect the industry which is unable to export to EU markets because of “excessive” Brexit red tape.Businesses including those in Argyll & Bute are on the brink after losing thousands of pounds worth of sales since Scotland was forced out of the EU on January 1.Despite claims that trade with our most important partners in the EU would be ‘frictionless’ after Brexit, our producers have been plunged into a crisis not of their own making; they are the collateral damage of a Tory party hell-bent on leaving the EU at any cost.In a specially convened meeting of SNP MPs and Logistics UK on Friday) I told them I have been contacted by one local seafood company which showed administration and checks on live exports had more than quadrupled since January 1. For them this is almost unsurvivable, they cannot afford the excessive bureaucracy and checks that are now being imposed. Boats are tied up, people haven’t had an income since before Christmas and all because the new process takes too long, is too complicated and this is driving customers in Europe away. This chaos is decimating an industry which was told leaving the EU would provide a ‘sea of opportunity’. Instead, they have been sold down the river.At Prime Minister’s Questions on Wednesday, the PM agreed businesses would be compensated. Later this week he rolled back on that promise. I have now written to him to demand he takes urgent action to compensate everyone affected by this disaster. At every single turn my SNP colleagues and I warned of the chaos of Brexit, yet the Tories took it to the wire giving those involved in exports no time to prepare. It is thoroughly depressing that we are now in a live test situation where businesses across Scotland are being sacrificed by a shambolic and inept government that disregarded the warning signs. These jobs and livelihoods might not matter to the Tories – but they matter to Scotland and the SNP.fb.watch/35i2AGw52a/ ... See MoreSee Less

Can you help Harvey find his best friend?It has been a week since three-year-old black Labrador, Baxter went missing on the Kyles of Bute Golf Course and best friend and uncle Harvey is longing for his return.The pair of black Labradors ran off on the golf course, chasing each other and playing as they normally do, however when owners Alex and Alison MacLennan called, unusually only Harvey returned.Owner, Alex MacLennan said: "It is especially at times like this, when you realise what a massive role dogs play within the family and we all miss him very much. Harvey loves to cuddle up with Baxter and hasn’t spent a night without him for the past three years. We are so thankful for everyone’s support so far and hopefully we will have Baxter back with us soon.”If you have any information to support the search to bring Baxter home, please contact pleasehelpfindbaxter@gmail.com or 07927 010362. ... See MoreSee Less

Installation of a protective bund next to the Old Military Road at the Rest and Be Thankful is now complete following several weeks of construction.The 175m long, 6.6m high bund will act as a protective barrier to provide additional protection to road users of the Old Military Road through Glen Croe. The barrier is formed using a modular system favoured by the military, with individual units stacked together to create a defensive wall across the foot of the vulnerable channel carved by two large landslips in 2020. The bund provides greater confidence in being able to safely keep the Old Military Road open for road users during inclement weather conditions. Transport Secretary Michael Matheson said: “I’m really pleased to see this protective bund completed, making the local diversion route more reliable and offering welcome reassurance to local road users. “This is important progress towards improving the resilience of the Old Military Road and I would like to put on record my thanks to the teams involved for all of their efforts. “Alongside these measures, Transport Scotland continues to explore future works for the hillside to bolster the resilience of this key corridor route.” Eddie Ross, BEAR Scotland’s North West Representative said:“We’re pleased to see the temporary bund completed on the Old Military Road, meaning we can have greater confidence that we can safely keep the alternative route open for road users when the weather conditions worsen. “This work, together with the successful installation of the in-channel barrier above the A83 which was completed before Christmas, means we’re continuing to strengthen the landslip resilience in the area following two large landslips in 2020. “We’re continuously monitoring the hillside and weather conditions in the area, and we’ll continue with work to progress with further mitigation work on the A83 at the Rest.“As ever we thank the local community and motorists for their continued patience while we do everything we can to address the ongoing issues at the Rest.”Real-time journey information is available from Traffic Scotland at www.trafficscotland.org, twitter at @trafficscotland or the new mobile site my.trafficscotland.org. ... See MoreSee Less

Thanks to the Argyllshire Advertiser for featuring a piece I wrote in conjunction with Hope for the Future and the Time For Change Argyll & Bute group on the impact of climate change on the A83 Rest and Be Thankful. ... See MoreSee Less

The SNP has slammed the Tory government for jeopardising Scotland’s international reputation with its 'disgraceful' decision to leave musicians and performers off the list of workers permitted to enter the EU without a visa – despite the EU’s offer to include it in the Brexit deal. After four days of denial from the UK government, who tried to place the blame on EU negotiators, it has finally been revealed that a proposal to grant UK performers visa-free tours in the EU in the Brexit deal was rejected by the UK government because they did not want to extend the same courtesy to EU artists visiting the UK.The Brexit deal agreed between the UK and the EU provides exemptions to visa rules for a number of workers travelling to different European countries, but does not include artists and musicians, meaning many will have to apply for separate visas for each individual country they visit whilst touring in Europe. Many have voiced concerns that this will increase the cost of touring. SNP Culture, Media and Sport spokesperson John Nicolson MP, said:“After almost a week of trying to pin the blame on Brussels, the UK Government now admits it made the decision to stop European Union performers coming here without a visa. That means our performers need visas to visit the EU too. “European performers, artists and creatives have enriched the Scottish cultural scene for decades. Our Edinburgh Festivals, Celtic Connections and thousands of events each year are enriched by our European neighbours and will now be impoverished because of a Tory Brexit deal imposed on Scotland against our will.“It’s been an incredibly tough year for Scotland’s cultural community. Festivals and venues are counting down the hours until they can reopen. The last thing they need is more barriers. And all fans want is to see their favourite bands here in Scotland. “The UK government must reconsider this decision and help, not harm, performers and musicians. Needless new work visas must be scrapped. “Scotland wants to keep its arms open to the world. This Tory Brexit is the very antithesis of everything the culture sector stands for.” ... See MoreSee Less
View on Facebook
· Share

This is devastating news for Argyll & Bute's important shellfish and seafood producers. The UK Government promised Brexit would be a "sea of opportunity" not a nightmare costing the industry upwards of £1million in lost sales a week and threatening the incomes of families across Scotland and the rest of the UK. I have repeatedly asked the UK Government, including Boris Johnson directly, to step up and cut the red tape so our live seafood producers can get to their markets in Europe. At PMQs today SNP Westminster leader Ian Blackford asked Johnson to intervene and provide crucial compensation for the industry before it's too late.Michael Gove has already backtracked on his 2016 promise there would be no sudden change that disrupts the economy. He now says “significant additional disruption” is expected at the border in the coming weeks, particularly on the Dover-Calais route. This is not good enough. Scotland has been dragged out of the EU against our will and it is our world-renowned industries that are suffering as a result.If any Scottish Tory, be that David Mundell, Alister Jack or Douglas Ross had a backbone they would stand up for these industries in this time of crisis. ... See MoreSee Less

Fresh seafood exports from Scotland to EU halted until 18 January

It's to their shame that Scottish Tory MPs failed to oppose these cuts, which would push thousands of children into poverty.

Says it all. The Tories have utterly betrayed Scotland’s fishing industry. https://twitter.com/scotfoodjames/status/1351118813421580288

Today, we have launched our consultation on the future of the Craignure ferry terminal.

We are looking for your views on the interim and longer term options for the pier.

We would be grateful if you could give your views here: http://bit.ly/38UeOel

10am phone call this morning,
‘can you get to vaccination place for 11am’?

ScotGov & Scot NHS I LOVE YOU.

Tariffs are damaging the exports and plans of distillers on both sides of the Atlantic - over £400m has been lost in #ScotchWhisky exports to 🇺🇸 alone.

At the roundabout under the Atlantic Ocean in the new 11 km sub-sea tunnel in the Faroe Islands tonight.

Art and engineering combined beautifully together.