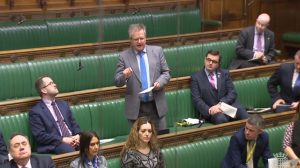 Local MP questions government on increased role of MoD Police:
On Monday morning, following further weekend reports in a national newspaper about the MoD Police based at Faslane and Coulport performing duties normally carried out exclusively by officers of Police Scotland, local MP Brendan O’Hara tabled a total of 21 detailed parliamentary questions to the Ministry of Defence seeking to find out why this was happening.

Yesterday (Thursday January 12) at Business Questions, Brendan asked the Speaker of the House for a “Government Statement” on the increased role of the Ministry of Defence Police within local civilian areas in and around Helensburgh and Lomond.
Specifically he sought clarity on who authorised this increased role for the MoD Police in civilian policing of the local community, and why. He also sought to find out if the officers involved were armed while on patrol and under what chain of command they report while on duty in civilian areas.
Commenting, Brendan said
“I am aware that there has long been a partnership between the MDP and Police Scotland and would expect no less in guarding the bases at Faslane and Coulport.
“But the public rightly expect that in our local communities, it will be the civilian force, Police Scotland who are providing the law enforcement service and if that situation changes, for whatever reason they have a right to know why.”
So today I have asked the government why it has been deemed necessary to involve the MDP in civilian duties. Who took that decision that it was necessary? What discussion were had with Police Scotland before the decision was made.?
What chain of command are the MDP working to while on duty in civilian areas and are the MDP officers working in the civilian communities around Helensburgh and Lomond armed?”