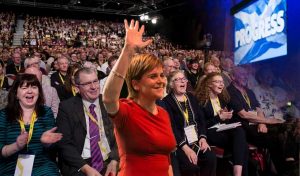 SNP membership has surged by 7,526 following Tory attacks on devolution, with voters across Scotland uniting against their brazen power grab.
This membership surge has now put the SNP on the cusp of being the second largest political party in the UK – ahead of the Conservatives.

The SNP has been vocal in its opposition to the Tory power grab, which will rip powers over 24 key areas away from Scotland’s Parliament after Brexit including on fisheries, agriculture, the environment and food standards.

After the Conservatives forced their power grab thought Westminster on Tuesday night, SNP MPs walked out of PMQs in protest at the devolution settlement – that the people of Scotland delivered two decades ago – being continually ignored by the Tories in an antiquated House of Commons.

The Scottish independence cause received a further boost this morning when former Daily Record editor, and the architect of ‘The Vow’, Murray Foote, confirmed that he now backed independence because of the events since the Brexit vote and the threat of hard-right, Tory government for decades to come. 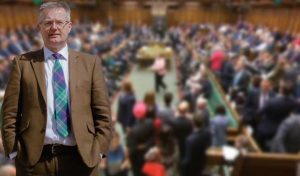 “The Tories think they can do what they want to Scotland and get away with it, but Scotland has told the Tories loud and clear – hands off our Parliament.”

“It is no wonder people are joining the SNP in their droves – we are the only party standing up for the people of Scotland at Westminster and are doing all we can to defend the powers of our Parliament and that is why 7,526 people have joined the party in the last 24 hours.”

“As my colleagues and I made clear at PMQs yesterday, this Tory power grab will not be tolerated and we will fight tooth and nail to defend the powers that are rightly held by Holyrood.”

“The Tories’ power grab has provoked a full-on constitutional crisis – but it is one entirely of their own making, and they can fix it at any time by ending their attack on devolution.”

“If they don’t, they’ll only see more people deciding that independence for Scotland is the best option for our future.”

Writing in The Times newspaper, Mr Foote said: “For me, independence is about autonomy, allowing Scotland to meet success and failure on its own merit and not point an embittered finger of blame at anyone else.

“I have reconciled that independence would herald good and bad. I trust in us to solve the problems that will come our way. If so many other countries can, it is inconceivable that Scotland can’t.
“The Yes-Yes campaign which brought our parliament back from the dead 20 years ago asked Scotland to take a leap of faith and to trust in ourselves. When we are next asked the independence question, I’ll strap on my work boots and take that leap.””