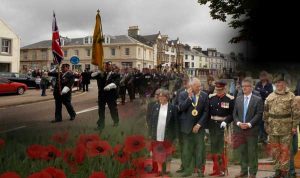 Despite the weather, people lined the streets to show their backing of service men and women as veterans from the Argyll and Sutherland Highlanders, serving personnel and cadets marched from the drill hall to the town’s front green.

“This is the fourth year that I have attended this very important event since being elected in 2015 and I wouldn’t miss it.  It is a particularly poignant year which commemorates 100 years since the end of the First World War; we must continue to remember those lives lost during that war and conflicts that have followed and recognise the sacrifice of men and women who are currently serving in our armed forces.  It is an opportunity for me to say thank you on behalf of the people of Argyll and Bute and a huge thank you once again to Betty and Geordie Rhodick and everyone who helped to organise another successful day that not even the weather could spoil.”